In 1931, when Universal released the classic monster movies Dracula and Frankenstein starring Bela Lugosi and Boris Karloff, the World was a far more innocent place.

Theatre goers at the time were presented with stories and images that would no doubt be considered to be rather quaint by today’s standards but during Dracula’s initial run the film was preceded by a scene similar to the prologue from Frankenstein, and featuring Universal stalwart Edward Van Sloan, as he appeared in a “curtain speech” and informed the audience: “Just a moment, ladies and gentlemen! A word before you go. We hope the memories of Dracula and Renfield won’t give you bad dreams, so just a word of reassurance. When you get home tonight and the lights have been turned out and you are afraid to look behind the curtains — and you dread to see a face appear at the window — why, just pull yourself together and remember that after all, there are such things as vampires!” This epilogue was removed out of fear of offending religious groups by encouraging a belief in the supernatural and wasn’t present when Dracula was re-released in 1937.

Frankenstein, with Boris Karloff and also released in 1931, was similarly afflicted by scenes written and filmed to deliberately horrify the audiences of the time. Indeed, Frankenstein famously had some scenes removed before opening which have only recently been restored for the DVD and Blu ray releases. One of the most well known cuts occurs when Frankenstein’s creation first moves its hand, the doctor screaming out one of the all-time classic lines in film history: “IT’S ALIVE!“ Then, immediately afterwards, Doctor Frankenstein exclaims, “In the name of God, now I know what it feels like to BE a God!” Yet this line was deemed blasphemous, and was removed from the picture due to pressure from religious groups.

Joining both Dracula and Frankenstein on Universal’s increasingly popular Monster production line was The Mummy, a 1932 American Pre-Code horror film directed by Karl Freund and again starring Boris Karloff who, this time, played the revived ancient Egyptian priest of the title. The critics consensus on Rotten Tomatoes™ is that The Mummy relies more on mood and atmosphere than the thrills typical of modern horror fare, setting a masterly template for all the Mummy themed movies to follow.

Now put yourself in the position of the general public in the 1930s. Picture Palaces were glorious cathedrals dedicated to the power of story. Arriving at the cinema was an almost religious experience, confronted as you were by the buildings striking facades with neon lights and strong vertical and horizontal lines. Inside, the glittering foyers and bars featured sleek curves and murals on a scale far removed from the drudgery of everyday life. Designers such as Harold Weedon oversaw the Art Deco designs of the UK’s Odeon Cinemas for Oscar Deutsch in the 1930s. Influenced by the work of Erich Mendelsohn and Hans Poelzig – the Odeons “taught Britain to love modern architecture”.

With Universal’s continued reliance on their Monster theme we were treated to further classics such as The Invisible Man (1933) with Claude Rains, Bride of Frankenstein (1935) with Boris Karloff and Colin Clive, Werewolf of London (1935) with Henry Hull and Dracula’s Daughter (1936) with Gloria Holden. Yet, as technical innovations in cinematography continued and more and more difficult and unsettling scenes were set to celluloid, the audience’s appetite for scares was beginning to wane.

Now skip forward a few decades and we arrive at a completely different Horror viewing landscape. In the 2000s a new genre of Horror was brought kicking and screaming into the homes of young adults everywhere. Films such as Saw (2004) directed by James Wan and Hostel (2005) directed by Eli Roth became the poster movies for a new generation of fans. As our tastes and awareness became more extreme it was necessary to include scenes of extreme torture and photo realistic maiming and dismemberment of the young victims to bring in the audiences as real horror could be viewed everyday on any satellite news channel 24 hours a day.

And it wasn’t just the films that had changed, but our viewing habits as well. TV’s, home cinema systems, 3D, 5.1, 7.1 digital surround sound, DVD, Blu ray, On Demand, all have combined to allow cinemas to be recreated in our own homes and dedicated film rooms.

Am I alone though that when watching old cinemas shutting down due to dwindling numbers I feel a sense of loss? A feeling that we are moving further and further away from a more precious and colourful time. Seeing the sumptuous Art Deco Picture Houses of our towns and cities slowly fading from view and memory as dereliction becomes prevalent fills me with sadness and regret. Watching a movie at home, whether it be from the 30s or 00s, can never truly give you the experience of the silver screen, the feeling of excitement as you arrive, the box office, even the BBFC message projected across the screen add that magical something, an aura perhaps? That just isn’t there when watching at home, no matter how big your TV is.

Which, in an extremely roundabout way, brings me to MotorMartin’s final thoughts on the Jaguar 2.5 S-Type that I’ve had the pleasure to spend time enjoying whilst driving around the country. As I finished part 2 https://motormartin.wordpress.com/2015/10/26/jaguar-2-5-s-type-thunder-road/ I commented that the Jaguar was a real Jekyll and Hyde car. It has the ability to waft along, providing the occupants with extreme levels of comfort, whilst travelling, seemingly forever, with cruise control set at 70mph. The Hyde part of its character was equally as strong. Pressing the accelerator into the carpet, with the sport button pressed, resulted in a rather surprising deep growl with acceleration to match, the gearbox changing up as the revs nudged the red line. Very, very satisfying when in the mood. But ‘real life’ is what MotorMartin is all about and it’s in this world that we need to look at the Jaguar again. 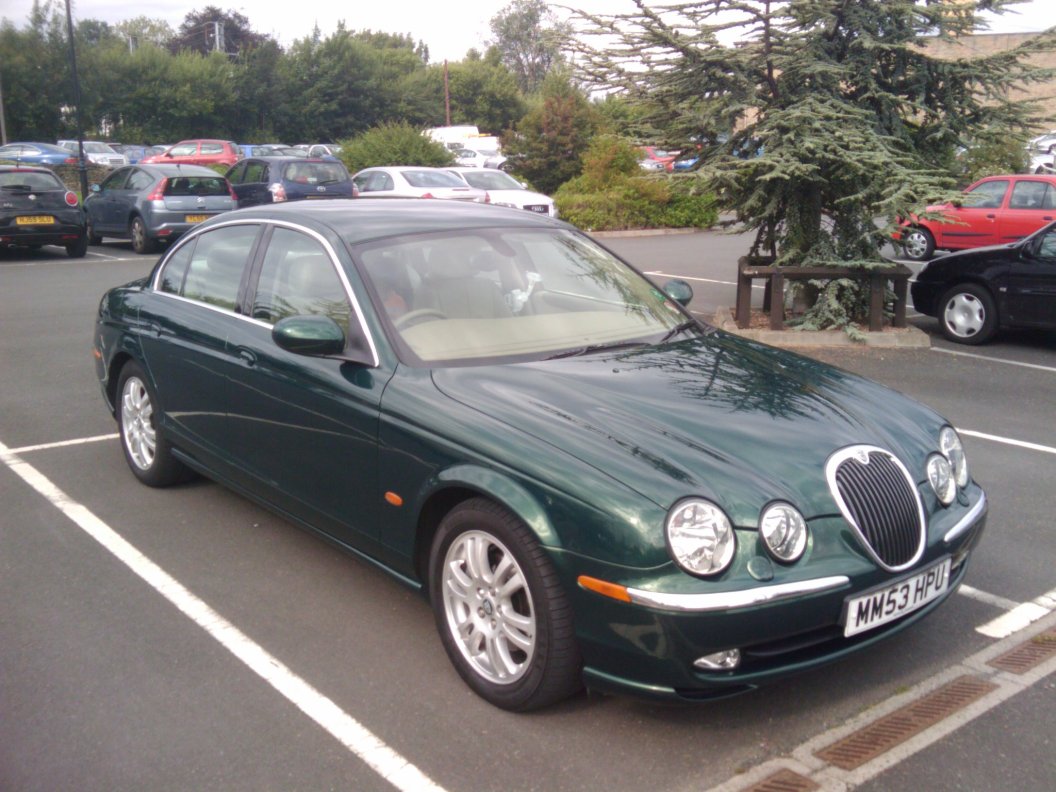 Price wise, there are not many other luxury cars that can be picked up for so little cash. How does £3000-£4000 sound for a fully loaded 65000 mile 2.5 S-Type grab you? With plenty of searching time set aside and an eye for the mechanical side of things then a good S-Type is certainly in reach of most people. Personally I like the nod toward the S-Type of old and see the Jaguar as quite a handsome beast with both the exterior and interior offering a touch of class to any drive. There’s a large, if shallow, size boot (rear parking sensors a bonus) which is more than capable of carrying a family of four’s luggage requirements for a summer holiday and plenty of storage inside for everyone’s bits and bobs. Around town, the big cat is easier than you might expect when it comes to nipping in and out of tight spaces during the daily commute and never feels anything less than relaxing to drive despite its size.

I love the Jag, I love the feeling it gives you when you relax into the leather seats. It’s the type of car that you have to remind yourself to get out of when you arrive at your destination as the temptation’s always there to turn around and set off again to who knows where. Does it pass the shop window test? Most definitely, I enjoyed admiring the car when stuck in traffic or glancing its reflected glory from the aforementioned shop windows and like to think that it can still turn heads today. 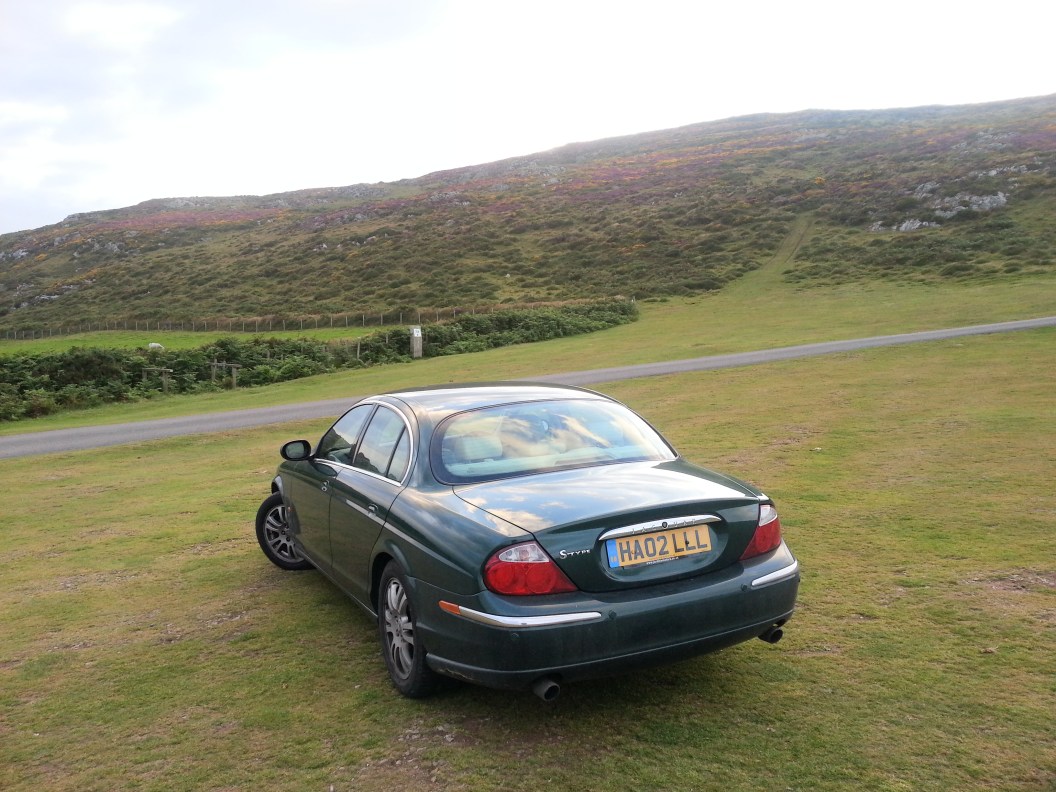 The S-Type then is a Universal Horror movie, a Werewolf, a Dracula, a Mummy or Frankenstein’s Monster. It relies on a more leisurely paced story, it builds tension slowly, allowing the audience to get comfortable, almost familiar whilst still having potential for horrific ‘real life’ performance. The ability to scare, 200bhp and rear wheel drive can do that to a person, is present in the Jaguar, yet when the engine is allowed to rev, the power, combined with the excellent chassis, is controllable and addictive. The S-Type delivers its thrills in black and white, performance that, like Universal’s Monsters, is wonderful when viewed on its own but can’t really compare with the latest horror movies played out, as they are, with graphic scenes of gore and degradation, an XF, E Class or 5 series if you will as they can be viewed and enjoyed in full 4K HD. It’s not really a fair comparison as technology and what the public want changes and evolves over time but there’s certainly room for both fans of Dracula and Hostel as they’re both entertaining, they just go about it in a slightly different way.

So can MotorMartin recommend the Jaguar 2.5 S-Type? Umm no. Everything about this car is excellent except for the overall running costs. Yes, the Jaguar is cheap to buy but the petrol consumption is awful. It’s around £80-90 for a full tank of juice yet under normal driving conditions you’ll be lucky to stretch a tank to 400 miles with 350 to empty being more realistic as the trip computer regularly reads as low as 17mpg. Combine this with rather extravagant parts and labour costs, especially when using an official Jaguar garage, and servicing can become an eye watering experience. With a higher mileage car expect to pay at some point to eliminate suspension groans and knocks which also won’t be cheap. Regular preventative maintenance will be required to keep the S-type in fine fettle which will again send the wallet or purse into palpitations and watch out if you require a new set of tyres as Jaguar, in their wisdom, decided upon an unusual size which is, of course, rather expensive.

So with regret, as Alan Sugar might say, MotorMartin’s emphasis on the real costs of ownership and ‘real life’ motoring focus just cannot allow me to recommend the Jaguar. For the average family the cost of ownership over three or four years are just too great to be practical.

I love you S-Type, but it will just never work, it’s not you, it’s me…